The Saborians grew up alongside the Redusa river delta on the continent of Amum, a land that while hot, was as rich and fertile as any. Four once-disparate city-states unified there under the shared tenets of freedom and equality. They believed in creating a utopia, self-sufficient and untainted by the rest of Foundation – an inclusive society, without crime or poverty. They dreamed of an afterlife known as Aetherium in which they would one day take their place as gods. Saborians spent most of their lives at a bathhouse called the cloistrum, where they exercised and socialised.[1]

Believed to be a policing or peacekeeping force in Sabor these were led by Telemon. Examples of godhand equipment can be found with the symbol resembling "<< <> >>". This appears on Apotheus engines, Titan cannons, several scrap items and most noticeably the Godhand Clamp. It is also visible on Saborian loot containers. Also available (in multiple colours) is the godhand clothing set: 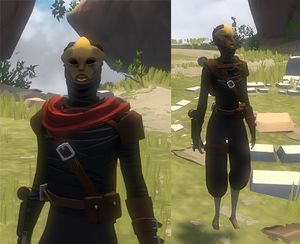 One of the great big industrial powers of Foundation, the Eagle-Eye company's engine designs were created by a young Saborian. In-game these are dubbed as "Ironforge" engines. Also available in-game is the Eagle-Eye worker's apron, a torso clothing item.