The Shipyard is the first available ship building tool in World's Adrift. At default it contains 5 base ship Schematics: 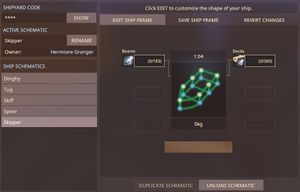 You can load any of these (by clicking on their name in the side bar) to either:

Once schematic is loaded (and saved, if it has been edited) the Shipyard will project a green wire-frame view showing where it will be built. You can now place Metal to make the frame, and Metal or Wood for the decks

Upon building or docking a ship, the Shipyard will project a blue bubble, signifying the extent to which your Gauntlet's Lift tool (Default [3]) will be able to manipulate ship parts. You can also latch onto the bubble with your Grappling Hook. Once this bubble has been created, ship parts located inside the bubble can be attached to the ship with the Gauntlet's Lift Tool.

To dock your ship maneuver close to the Shipyard and cut all propulsion, the Shipyard should drag the ship into the correct position and project the bubble around it. If this doesn't immediately happen:

As of Alpha 6.0, shipyards can be damaged by understorms. They will receive damage every time lightning strikes the bottom of the island they are located on, and will eventually be destroyed if not repaired.[1] To repair your shipyard, find the metal that the shipyard was built with and use your repair tool. They can be used even if they aren't fully repaired, however this may take a while.